Click on the links below to jump to the relevant section:

The standard USB connector lets you charge your devices in lots of places, whether it’s at someone else’s house, a hotel or your workplace. With just one cable, you can hook up your device and come back when the battery’s full.

But are you risking your device—and even your own safety—by doing so? This guide answers the most common questions around USB charging and how to do it safely and securely.

Can using the wrong USB charger damage my device?

Using another device’s charger is unlikely to damage either the device you’re charging or the charger itself, providing the charger is well made and meets safety standards.

Chargers are built to provide just the right amount of electrical current (measured in amps). And the devices themselves are designed to draw only the current they need and cut off the flow when the battery is full. This stops the devices from overheating or suffering any damage.

Can I charge my device with any USB charger?

You can, but how quickly the device charges depends on:

Because some devices need a stronger electrical current than others to charge, you might notice a marked difference in charging speed. A smartphone, for instance, can charge properly on 1 amp of current, while a tablet requires over double that (2.1 amps).

Our guide to USB chargers explains how current works and why some chargers are faster than others.

Can I use a computer to charge my device?

Yes—just connect the cable to your device and plug the USB connector into one of the ports. However, you’ll find that, compared to using the wall charger the device came with, it’s a much slower process, for a few reasons:

Many computers now have what are called ‘sleep-and-charge ports’—USB ports that provide power for charging even when the computer is in sleep mode or shut down completely.

Are USB wall sockets safe to use?

You may have seen plug sockets with built-in USB ports in places such as airports and offices. If you’ve moved into a new-build house, they might even have been installed as standard.

They work the same as any USB port: you connect the cable to your device and plug it straight in, without the need for an additional AC adapter.

While it’s generally safe to plug any USB-compatible device into one of these outlets, you’ll encounter the same issues with charging speed as mentioned above.

All USB wall outlets convert the 240-volt mains electricity into the standard 5 volts used to power electronic devices. However, not all outlets provide the same current—some cheaply made models go as low as 1 amp—and many of those with two sockets even share the current between them. 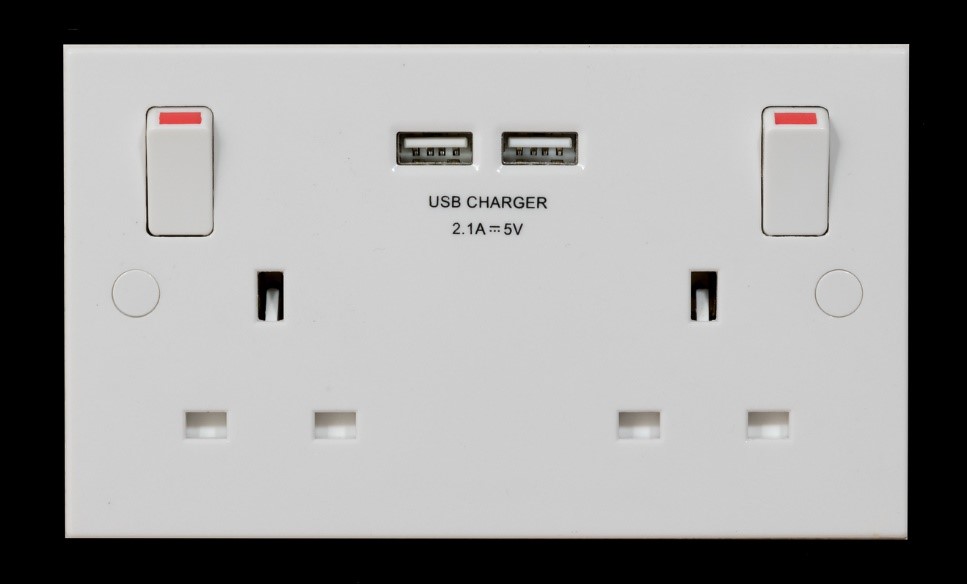 The outlet pictured is rated at 2.1 amps, split between the two sockets. That means you could charge a smartphone in each socket at the same time and achieve full charging speed. But try charging two tablets, or a smartphone and tablet, and you’ll be waiting for hours.

Do bear in mind, though, that there are cheap, substandard products available on the market which, as well as performing badly, could endanger your safety.

Is it safe to leave my charger plugged in all the time?

A charger disconnected from a device but left plugged in to a wall outlet will still use a tiny amount of electricity and may heat up slightly as a result. However, this will only present a risk if:

Most instances of fires caused by plugged-in chargers have arisen as a result of these circumstances. Electronics manufacturers comply with very strict safety standards when making their products, to ensure that there’s little risk of these kinds of fires occurring.

Is it safe to leave my device charging overnight?

Generally, yes. Modern electronic devices are made to protect themselves against receiving too much current, and good-quality chargers will stop transferring power once the battery reaches 100%.

However, you’ll hear advice from a lot of sources that warns against leaving smartphones and other gadgets to charge while you sleep, in case a fire does break out and you need to evacuate quickly.

Could I have my data stolen if I use a public USB wall socket?

It’s possible. The public charging stations you find in airports, on planes and in business venues like conference centres may be a welcome sight if your battery’s running low. But they give you very little protection against hackers and people who are trying to steal your data, and most technology security professionals advise heavily against using them.

Why? Because if the socket is able to transfer power and data at the same time—as many USB sockets are—connecting a device such as a smartphone could make some of your data accessible. It won’t be all your files and personal information—and how much of it’s transmitted depends on the model of phone and operating system used—but enough data for it to be a potential breach of your privacy. It could include the name of your device (possibly your own name), the network you’re on, and the phone’s serial number.

Although your privacy won’t be breached simply by using a public USB socket—it requires someone hacking into it for nefarious reasons—it makes you a lot more vulnerable. If you must plug in to one of these sockets, it’s worth following the advice given below.

USB wall sockets installed in homes and other private locations will transfer data in the same way, but are much less open to being compromised and so are generally safe to use.

Can viruses be transferred through a public USB port?

Yes, for the reasons mentioned above. And it could be achieved in only three minutes, as security firm Kaspersky Labs found in a wired mobile charging experiment they conducted.

How do I prevent my device from being hacked or damaged by public USB charging ports?

It’s simple—don’t use them! But here are some tips on how to protect yourself:

Antivirus software company Norton provide useful recommendations on smartphone security and what to do when travelling.

This study by Electrical Safety First identified a number of poor-quality chargers that put users at risk of electrocution and fire.